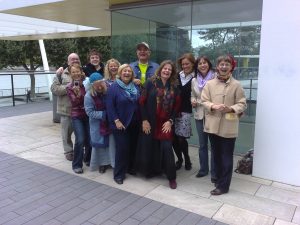 UnitedMind is committed to bringing laughter to the general public in the United Kingdom.

Since starting as a Laughter Yoga Training Provider in 2003 many hundreds of people have been inspired to start public and community laughter groups.

The Laughter Clubs are spread around the country and more groups start every month, each with a vision to spread laughter for the personal, physical and psychological benefits obtained through the activities.

The public sector employ many Laughter Professionals without taking full advantage of the added value they bring to the organisation.

Motivation, self-esteem, communication, productivity, inclusion – all beneficial core values to any organisation as well as individual.

There is no doubt health is everyone’s business and we need to meet the needs of the communities in a progressive and transformative way!

Together with our business partners UnitedMind deliver programmes to promote inclusion and confidence in the community. Read more about our work with The Regency Training Foundation for example on our Alliances page.

For further details and information about our bid to meet the countries requirements for their Healthier People, Healthier Communities campaigns please contact us.

The laughter clubs can be developed and maintained as a major contributor to several of the aims of the Big Society plans as well as the counties’ plans for happier, healthier communities.

By training specific target groups and teaching them how to set up community groups and businesses they become an active part and co-creator of their own world.

The participants will be enabled to bring together groups of people and facilitate activities that encourage community as well as personal growth.

The aim of the Laughter Yoga Leader Training is to encourage and enable individuals to start Laughter Clubs in their communities and by doing so they support and inspire others who may be equally challenged to embrace the changes and challenges suggested and promoted by the wider-scale ideas.

Starting a Laughter Club or Community Group is the first step towards a sense of achievement and improving self-confidence which in turn inspires people to become more active either in the community or in the workplace.

Through this encouragement via the training idividuals can have an impact on their own life from a confident perspective after having learned techniques to help them in dealing with adversity and challenges as well as on the groups in which they interact.

Furthermore, by bringing the laughter and learning into their community they help inspire a wider audience to be part of the community plans and effectively the execution of these.

The Laughter Club International (UK) is a non-profit community group where all proceeds go to support charity organisations, locally as well as nationwide.

Read all about it!

UnitedMind Laughter Yoga in London and UK Ltd
5.0
Based on 16 reviews

Tina Poyzer
12:43 29 Apr 20
Great course delivered by a very knowledgeable laughter... yoga expert and leader. Lotte is very supportive and knows how to structure and deliver the training. Got lots out of this and well worth it.read more

Mary R
10:10 11 Mar 20
What a wonderful training and atmosphere. I have never... laughed 10-15 minutes without a pause in my whole life. Mel and Lotte were very supportive and helped me relax and enjoy more this training. When I come back home, I felt I was in vacation for 2 weeks. I fully recommend it. Looking forward to meeting you again very soon. Thanks, Maryread more

Tobias Oliver
15:21 08 Mar 20
Laughter Yoga training is seriously good fun! I had a... brilliant two days training to be a Laughter Yoga teacher with UnitedMind. Lotte and Mel were fantastic tutors - welcoming, knowledgeable, and supportive. I learnt so much, including the science behind why laughter is so good for our health. What's more, I have never laughed so much on a training course before! I'd strongly recommend it.read more

Bex Band - Love Her Wild
09:17 18 Feb 20
I wasn't sure how the group would take to my surprise... Laughter Yoga workshop but they loved it! I've never laughed to hard in my life. Great team bonding experience and we are still talking about it weeks later. Lotte was great - don't hesitate to book!read more

Rose Beauchamp
18:08 13 Feb 20
Absolutely inspiring, high energy workshop - I learned so... much from Lotte, who is both wise and wonderful. Thank you Lotte for sharing the joys of laughter and your experience so generously!read more

Spencer Cartwright
09:43 15 Jan 20
I had an amazing two days' training from Lottie and Mel... from UnitedMind Laughter and as you would expect, it was a hoot!! So much fun, so much joy and so much laughter. The training was very professional and extremely welcoming and friendly. We were challenged to explore our childlike joy and to connect with one another through the simple, but powerful activity of shared laughter. I learnt a lot and will take my new found skills and knowledge to share with others. Thank you for a great training event.read more

Chris Read
23:18 17 Dec 19
I attended the Laughter Yoga Leader training in London... earlier this month. Lotte and Mel are ideal tutors for this course. The training was extremely well structured and delivered, with concepts clearly explained. The support and encouragement offered by the tutors was brilliant, with plenty of opportunity to practise and ask questions. A terrific weekend and a great start to my Laughter Yoga journey.read more

Claire Appleton
19:15 10 Dec 19
I would highly recommend a course with united mind or Lotte... Mikkelson, an amazing teacher. The most fun I have had learning. I hope to join more of her courses in the future.read more

Mafalda Marques
09:35 26 Oct 19
Had the best experience ever in the Laughter Yoga Leader... course with Lotte and Sue! They were amazing and I would definitely recommend that everyone gave it a go to Laughter Yoga! A big thank you for a wonderful weekend!!!read more

Sian Roach
19:57 30 Aug 19
I have recently completed the Business Expert Programme... with Lotte of UnitedMind. I have worked with Lotte on 2 previous occasions - to train as a Laughter Yoga Leader & a Laughter Coach, & although I learnt a great deal to get me started in the world of Laughter Yoga from these 2 courses, I needed to progress my passion for sharing the benefits of laughter into a business model - & Lotte's Business Expert Programme was the perfect course! It was held via Zoom for convenience & broken down into 4 interactive and very engaging sessions, focusing on the key principals of creating a Laughter Business, from creating your perfect bio, to perfecting your presentation skills, marketing your services and running a business. It was an extremely helpful and practical course which has helped me form my business plan for the next 12 months and beyond. Lotte is extremely knowable, professional & friendly. I look forward to working with Lotte again and highly recommend this programme.read more

Missy D
12:14 22 Aug 19
I have trained as both a Laughter Leader and a Laughter... Teacher by the amazing Lotte Mikkelson within the space of a few months. I cannot tell you how highly I recommend this course. Not only that I highly recommend laughter to you too. Lotte is an amazing teacher who gets on with everyone and is insanely zany! She is also firm and strict when it is needed. But a big treasure trove of laughter knowledge and research. I am glad I found Laughter Yoga but more importantly Lotte who is now my lifelong Guru (self-made hahahahahaha). I cannot recommend this enough. We need to take over the world with laughter, as it truely is the best medicine! I was looking for a career change that would make me laugh my way out of bed and laugh all the way through it. A job that doesn't even feel like you are working. I found it and love it!read more

Jan Turner
08:11 09 Aug 19
Meeting Lotte changed my life! I had looked into Laughter... Yoga and attended a workshop that was a day course called Laughter Therapy. Lotte is different, her training is fun yet professional and evidence based. Her training is robust, and currently offering accreditation for those seeking to work in the field of LY. I have attended her Leader, teacher, therapy and gibberish workshops, and fantastic conferences with international speakers. Oh and yes, my life changed. Since Laughter Yoga, no hypertension or asthma!read more
Next Reviews

“Life's most persistent and urgent question is,

It is a long time since we shared laughter in pers

Yesterday I had follow up meetings morning and eve

This week is Mental Health Awareness Week. Every d

Laughter Yoga gives you a dose of healthy goodness