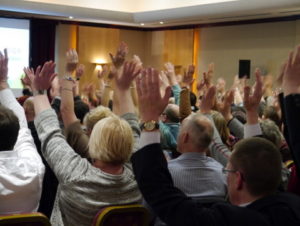 The MS Life event was held in Manchester in 2012 and 2014, a bi-annual event where I am excited to have been sharing Laughter Yoga – and now in London. 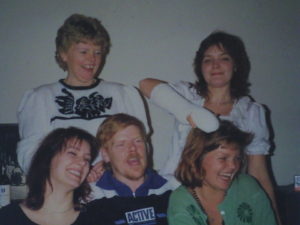 My background with MS is a long one that started around 1990 when my sister was diagnosed with MS. She died in 1991 only one year following the diagnosis.

I never thought of MS as a hereditary condition.

Until January 2008 when I had the diagnosis MS. Tthe consultant I was seeing at the time simply told me that being the same gene-pool meant it was likely that I would be more at risk.

So there – a complete change of plans for my life as I knew it (I thought).

I started The Telephone Laughter Club where we laughed for the first six months seven days a week and it was great. Now we don’t laugh at weekend (haha)…

It was a means for me to combat stress. Through laughing every day I was hoping to avoid relapses which occur when your body is worn down, typically from too much stress nagging at your immune system.

You can read the story of The Telephone Laughter Club on https://www.unitedmind.co.uk/laughterclubs/telephonelaughterclub/telephonelaughterstory/. And also read about the training, coaching, workshops and other laughter-based events I run and co-organise around the country.

UnitedMind Laughter Yoga in London and UK Ltd
5.0
Based on 16 reviews

Tobias Oliver
15:21 08 Mar 20
Laughter Yoga... training is seriously good fun! I had a brilliant two days training to be a Laughter Yoga teacher with UnitedMind. Lotte and Mel were fantastic tutors - welcoming, knowledgeable, and supportive. I learnt so much, including the science behind why laughter is so good for our health. What's more, I have never laughed so much on a training course before! I'd strongly recommend it.read more